With over 35,000 research papers, books and articles written on leadership theories, it safe to say we know quite a bit about what is involved in leadership. However, the sheer volume of information available, coupled with the lack of evidence behind many popular notions on leadership can be confusing and unhelpful.

The search for the characteristics or traits of leaders has been ongoing for centuries. History's greatest philosophical writings from Plato's Republic to Plutarch's Lives have explored the question of "What qualities distinguish an individual as a leader?" 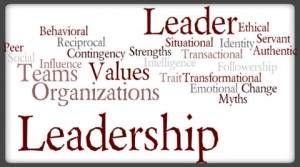 For decades, this trait-based perspective dominated the research work in leadership. Using early research techniques, researchers conducted over a hundred studies proposing a number of characteristics that distinguished leaders from nonleaders:

In the late 1940s and early 1950s, a series of qualitative reviews of these studies  prompted researchers to take a drastically different view of the driving forces behind leadership. 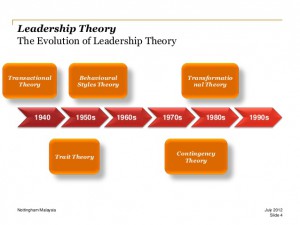 Subsequently, leadership was no longer characterised as an enduring individual trait, as situational approaches found that individuals can be effective in certain situations, but not others. This approach dominated much of the leadership theory and research for the next few decades.

While many different leadership theories have emerged, most can be classified as one of eight major types:

Great Man theories assume that the capacity for leadership is inherent – that great leaders are born, not made. These theories often portray great leaders as heroic, mythic and destined to rise to leadership when needed. The term "Great Man" was used because, at the time, leadership was thought of primarily as a male quality, especially in terms of military leadership.

Similar in some ways to "Great Man" theories, trait theory assumes that people inherit certain qualities and traits that make them better suited to leadership. Trait theories often identify particular personality or behavioral characteristics shared by leaders. But if particular traits are key features of leadership, how do we explain people who possess those qualities but are not leaders? This question is one of the difficulties in using trait theories to explain leadership.

Situational theories propose that leaders choose the best course of action based upon situational variables. Different styles of leadership may be more appropriate for certain types of decision-making.

Behavioral theories of leadership are based upon the belief that great leaders are made, not born. Rooted in behaviorism, this leadership theory focuses on the actions of leaders not on mental qualities or internal states. According to this theory, people can learn to become leaders through teaching and observation.

Participative leadership theories suggest that the ideal leadership style is one that takes the input of others into account. These leaders encourage participation and contributions from group members and help group members feel more relevant and committed to the decision-making process. In participative theories, however, the leader retains the right to allow the input of others.

Management theories (also known as "Transactional Theories") focus on the role of supervision, organisation and group performance. These theories base leadership on a system of rewards and punishments. Managerial theories are often used in business; when employees are successful, they are rewarded; when they fail, they are reprimanded or punished.

Relationship theories (also known as "Transformational Theories") focus upon the connections formed between leaders and followers. Transformational leaders motivate and inspire people by helping group members see the importance and higher good of the task. These leaders are focused on the performance of group members, but also want each person to fulfill his or her potential. Leaders with this style often have high ethical and moral standards.

So in summary, leadership has been studied and therefore explained from a number of different perspectives, each with its own insights as well as its own limitations. These perspectives can be broadly classified as:

Despite the large volumes of research and theories put forward, there is no general agreement on a definition of leadership, the characteristics of leadership, or the training involved to become a leader.