Understanding the Cycle of Change

The amount of significant change in organisations has increased tremendously in the last few years, making it critical to understand the cycle of change.

This change occurs through downsizing, rightsizing, reengineering, restrategising, mergers, quality initiatives and cultural renewal efforts. This is as a result of organisations being pushed to reduce costs, improve the quality of their products, improve their services, increase productivity, and locate new opportunities for growth. 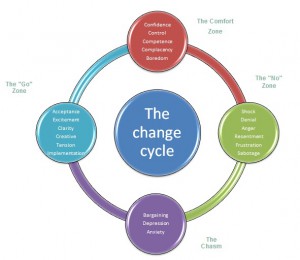 In a lot of cases, the price of change has been high. The carnage has been disproportionate compared to the results, with wasted resources, and burned out, scared and frustrated employees. A lot of the change initiatives have not taken account of the cycle of change.

Often managers make the mistake of assuming that once a change initiative has commenced, employees will see that it is going to take place, and get on side. This is rarely the case. As change usually causes fear, a sense of loss of the familiar, etc., it usually takes some time for employees to a) understand the meaning of the change and b) commit to the change in a meaningful way.

It is important to understand that people usually go through stages in their attempts to cope with change. Understanding the cycle of change helps leaders avoid under-managing change or over-reacting to resistance.

The stages as similar to the stages in the grief cycle, such as the loss of a loved one.

"I've heard these things before. Remember last year they announced the new customer initiative? Nothing ever happened, and this will pass as well."

"It's just another stupid idea from the top."

"I bet this will be like everything else. Management will be real gung-ho but in about six months everything will be back to normal."

People in the denial stage are usually trying to avoid dealing with the fear and uncertainty of potential change, and hoping they won't have to adapt to it.

People tend to move on from the denial stage when they see solid, tangible indicators that things have changed. Even with these changes, some people can remain in denial for some time.

When people can no longer deny that something has happened, they tend to move into a state of anger, accompanied by some form of resistance. This stage is the most important with respect to the success of the change initiative. Leadership is needed to help work through the anger, and to help move people on to the next stage. If leadership is poor, the anger at this stage may last indefinitely.

This is the stage where people begin to get over the hump. They have stopped denying, and while they may be somewhat angry, the anger has moved out of the spotlight. They are more willing to make efforts to understand the change further, and to accept it. They are more open-minded and are now more interested in planning around the change and being participants in the process.

"Well, I guess we have to make the best of it."

"We need to get on with business."

This is the stage where people commit to the change, and are willing to work towards making it happen. They know it is a reality, and at this point have adapted sufficiently to make it work. While some changes will never get support from all employees, once the majority reach this stage, the momentum generated will ensure the change project is effectively completed. 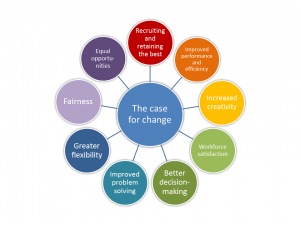 Hoping the business environment will stabilise and the need for change will diminish is not supported by the evidence, and the indicators are that the rate of environmental change will increase, and the pressure on organisation to transform themselves will grow over the next few decades.

It is important therefore to learn more about what creates successful change, particularly the cycle of change, and to use it effectively, to optimise any change initiatives.