What is Transformational Leadership

Transformational leadership is defined as a leadership approach that involves change in individuals and social systems.

In its ideal form, it creates valuable and positive change in the followers with the end goal of developing followers into leaders. In its authentic form, transformational leadership enhances the motivation, morale and performance of its followers through a variety of mechanisms.

These include connecting the follower's sense of identity and self to the mission and the collective identity of the organisation; being a role model for followers that inspires them; challenging followers to take greater ownership for their work, and understanding the strengths and weaknesses of followers, so the leader can align followers with tasks that optimizes their performance.

Working for a transformational leader can be a wonderful and uplifting experience. They put passion and energy into everything. They care about you and want you to succeed.

Transformational Leadership starts with the development of a vision, a view of the future that will excite and convert potential followers. This vision may be developed by the leader, by the senior team or may emerge from a broad series of discussions. The important factor is the leader buys into it.

The next step, which in fact never stops, is to constantly sell the vision. This takes energy and commitment, as few people will immediately buy into a radical vision, and some will join more slowly than others. The transformational leader takes every opportunity and will use whatever works to convince others to get onboard.

In order to create followers, the transformational leader has to be very careful in creating trust, and their personal integrity is a critical part of the package that they are selling. In effect, they are selling themselves as well as the vision.

In parallel with the selling activity is seeking the way forward. Some transformational leaders know the way, and simply want others to follow them. Others do not have a ready strategy, but will happily lead the exploration of possible routes to the promised land. 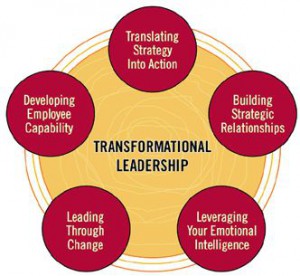 The route forwards may not be obvious and may not be plotted in detail, but with a clear vision, the direction will always be known. Thus finding the way forward can be an ongoing process of course correction, and the transformational leader will accept that there will be failures and blind canyons along the way.

The final stage is to remain up-front and central during the action. Transformational leaders are always visible and will stand up to be counted rather than hide behind their troops. They show by their attitudes and actions how everyone else should behave. They also make continued efforts to motivate and rally their followers, constantly doing the rounds, listening, and enthusing.

It is their unswerving commitment as much as anything else that keeps people going, particularly through the darker times when some may question whether the vision can ever be achieved. If the people do not believe that they can succeed, then their efforts will drop. The transformational leader seeks to infuse their followers with a high level of commitment to the vision.

One of the methods to sustain motivation is in the use of ceremonies, rituals and other cultural symbolism. Small changes get big recognition, showing the indicators of real progress.

Overall, they balance their attention between action that creates progress and the mental state of their followers. Perhaps more than other approaches, they are people-oriented and believe that success comes first and last through deep and sustained commitment.

Whilst the transformational Llader seeks overtly to transform the organisation, there is also a tacit promise to followers that they also will be transformed in some way, perhaps to be more like this amazing leader. In some respects, then, the followers are the product of the transformation.

Finally, transformational leaders, by definition, seek to transform. When the organisation does not need transforming and people are happy as they are, then such a leader will be frustrated. Like wartime leaders, however, given the right situation they come into their own.